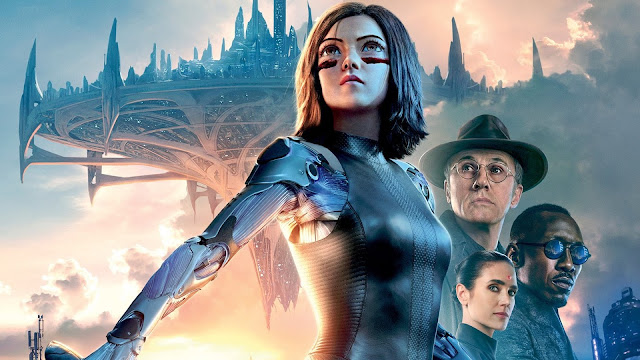 For all the hype about it's animated lead character, and the clashing of titans that is Robert Rodriguez and James Cameron, Alita: Battle Angel is the teen fantasy movie (potential) franchise you didn't know you were getting and I'm not sure you wanted.

Alita starts with Christoph Waltz finding her discarded shell in the trash dump of a mysterious floating city that lords over the world on the ground. He then take her back and, with the help of his *mayaswellbemute* assistant, rebuilds her with a teen shaped mech body he just happens to have lying around and gives her the name of his dead daughter. None of this is supposed to be creepy at all. When Alita, Rosa Salazar, starts to realise that she is not just your typical abandoned teendroid but actually a super slick alien android with secret ninja fighting skills she does what any girl would do... she throws herself at, literally, the first boy she meets and takes up roller derby. Oh but she's also a sassy vigilante too.

Given that this film was almost three decades in the making I was hoping to get more than just two hours of a girl making giant anime style doe eyes at the boy who is obviously working for the bad guy played by Mahershala Ali who is, like the two other Oscar winning actors in this film, completely wasted. #JusticeForJenniferConnelly who spend the whole movie looking moody but sexy and appearing out of nowhere to make bitchy comments.
I was also taken aback at the abrupt ending and lack of resolution. This film is all set up and no punch line. Which would be fine but I wasn't sold a franchise, in fact I can't find anything to confirm that a sequel has been greenlit so if Alita does end up being a standalone movie it will be a thoroughly frustrating one.

When you dig a little deeper in to the history of the film it becomes clear why it has no depth at all. Production started in the 90s with James Cameron wanting to adapt the famous Manga series - Battle Angel: Alita - but due to a lack of technology he quickly abandoned it for shinier projects like Titanic. He then got all wrapped up his Avatar world which currently has four sequels - why though - in the works and passed the script off to Rodriguez who then edited it down to something less bloated and we have our film today.

Ok it's not that bad. It has some really cool fight scenes too.